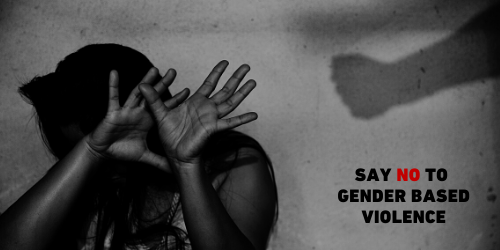 He stormed into the room fitfully breathing, blustering like a tragic tyrant throwing his hands frantically in the air enraged like a son of thunder. This time it wasn’t the romantic playful horseplay she had gotten used to over the years. As she was halfway explaining herself, That soft caress she was used to was replaced by a sharp slap on her left cheek.

“Shut up!” he yelled

With a tone that turned to vitriol against her replacing those sweet serenading words that had once awakened butterflies in her . As if that wasn’t enough, He bashed and smashed her against the wall. With his grip tightly wrapped around her bony neck like a snake engulfing its prey. He struck her with a firm blow on the left cheek again with droplets of blood flying across the room and one loose tooth, vanquishing an already cowed woman.

She let out a discordant high pitched scream. With her hand on her lower lip still petrified and terrified in total denial of all the current happenings. She found herself staggering to the corner desperately asking the walls for protection. At this moment she just hoped they would swallow her inside. It was all a blur as she saw him charging towards her like a rodeo bull. She was his red-flagged target.

He gruesomely beat her up, placing all his weight into a downward attack with his fists. She curled her legs up to the chest and kept her arms close to the torso like an embryo in the womb.

Minutes later, her motionless body is seen lying helpless in a pool of blood. Faintly panting and breathing her last. Full of regret, rueing the day she said I do to him. Like a broken record, repeatedly said he wouldn’t do it again .

The perpetrator sweet-talked his victim not to report with a wardrobe of “I’m sorry” outfits. She lively regretted how she was so naive and gullible to trust his meaningless words in favour of the emotional scars she retained within her. Each time she wanted to dial those numbers he would sweetly remind her how he wasn’t a violent person. All those episodes were followed by reconciliation and calm moments. To her, the reason behind her silence was because of lack of financial resources, fear, shame, and to protect her son.

Now, as the undertakers slowly lower her coffin into the grave, she is worried about her baby boy who witnessed his mama helplessly lying on the floor giving out her last breath. Now, what use will she be of to him now that she is saying her last prayer? She is scared it will induce an intergenerational cycle of abuse in him.

What if he ends up feeling like such violence is acceptable or condoned?

How does she help and liberate the woman in her shoes to be set free?

How does she tell her that she is not imagining the abuse, the emotional and physical pain?

How does she tell her that what she feels is real?

How does she tell her that she shouldn’t believe she is partially to blame for the abuse in the relationship?

She needs to tell other women in the same situation that they should seek help before they end up corpses just like her. Her last words will be, “DO NOT SUFFER ALONE!”

Where can people report for help IN ZIMBABWE?

Who else is assisting women and victims of violence and abuse?