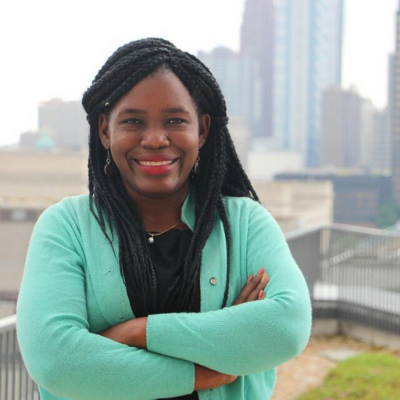 Tell me about yourself i.e., line of work, education, and career?
I am a social entrepreneur and a decent work advocate with a particular interest in domestic work, with over 10 years of experience in Human Resources Management. My special interest lies in Labour Law. I am the founder of Chris&Geo Executive Domestic Placements, a recruitment and placement agency for domestic workers and the Domestic Workers Association of Zimbabwe. The vision behind these two organisations was to formalize and professionalise the domestic-worker sector. I write and speak on domestic work has also written a manual for domestic workers. My hope is for a social democratic society that frowns heavily upon the oppression of the minority.

What inspired you to pursue your line of work/business and how much work did it take for you to get where you are now?
As a nursing mother, having gone through the experience of needing a domestic worker but failing to get one; Chris&Geo was birthed to fill in this gap. I had problems getting a good domestic worker each time, I needed one and this opened my eyes to the huge service gap. I was not alone in my struggle; many other working mothers faced the same challenge. I decided to seize the opportunity by establishing a service agency to close the gap between women looking for a domestic worker and those looking for employment as domestic workers; thereby killing two birds with one stone.
The Domestic Workers Association of Zimbabwe (DWAZ) is a membership-based network of Zimbabwean domestic workers based locally or in the diaspora. The plight of domestic workers is one that has received very little attention and intervention. The fact that no custom-tailored interventions had been developed and implemented in the domestic work sector stands as evidence of the marginalization and exclusion of this important group of workers across the globe. ILO estimates that in 2015, the total number of domestic workers was around 67.1 million worldwide.
Domestic work itself accounts for 1.7 per cent of total employment worldwide and some 3.6 per cent of all wage employment. According to the same ILO report, throughout the African region, 5.2 million domestic workers are employed of whom 3.8 million are women and 1.4 million men. As DWAZ we are motivated to make a sustainable difference by doing everything we can to respond to and try to address the myriad of challenges facing domestic workers in Zimbabwe.

Every journey has its share of challenges; what were yours? Did you ever feel like giving up? If so, what kept you going?
There is very little literature for and on domestic work. This presents a huge challenge as you are working on everything from scratch. Donor and other project supporters often want challenges quantified in terms of statistics which, in the case of domestic work is not available and it is frustrating when you lose out simply because you don’t have the evidence to present regarding a challenge that you are in the process of solving. However, I have managed to publish a book, titled ‘A Guide for Domestic Workers’. I also write and blog in my spare time as part of my efforts to have as much literature about domestic work as possible floating around. Although I have done some research on domestic work, I hope to publish more articles as there is little content on domestic workers, let alone the statistics.

Support is also one of the challenges you face as a vision bearer. People are usually reluctant to jump into fields which they either do not really understand or appreciate, or projects they feel might influence the status quo. A simple example is an employer who has a domestic worker at homecoming across a piece of information saying let us fight for enforcement of decent wages and work conditions for domestic workers. Immediately, most people may feel threatened because they fear once such change happens, they may be forced to pay higher wages to their employees. This is the kind of tension you find within the industry as you strive for change and it is just one of many examples. Even corporates and other government extensions which share common interest and mandate, sometimes they are not most enthusiastic about not so popular work. I am however grateful that thus far, I have received progressive support from my family, friends, government, and various institutions.

Resources are another major hurdle. My greater vision is to build and open a vocational training centre specifically for domestic workers. In as much as we are making progress, both financial and other kinds of necessary resources are hardly adequate to pick up the pace on realization of the ultimate goals. One can however appreciate that there is promising and growing positive development in terms of the possibility of eventually securing enough resources for the vision and greater good.

Policy enforcement. I wish and work every day for even greater government policy adjustments with regards to domestic work but the rate at which we are forced to move is very slow. You will realize that legislations and documented provisions in the constitution and other relevant national policy frameworks do recognize domestic work and domestic workers. The challenge comes at enforcement. A simple example, the ILO and many governments including Zimbabwe have a policy that stipulates that ALL workers should have contractual agreements before commencing work but unfortunately, it is not happening on the ground.

More so, adjustment and revision of policy for domestic work are rather ineffective. For example, the wages for domestic workers were last reviewed in 2020 and remains at 10USD minimum, but with current monetary rates and all the changes taking place, this is not a practical figure. Other professions have had countless upward salary reviews and adjustments, but nothing has been done for domestic workers, this is a sad state of affairs and it breaks one`s spirit but these are, after all, the issues for which I wake up every day to face and try to influence a change for the better.

Any notable milestones/achievements you would like to share?
I have quite a number of achievements which I can mention. First, one being the recent winning of the International Labour Organisation Skills Mismatch Challenge which offered us our biggest leap yet towards the realization of our vision. This is one achievement I am thankful for and very proud of. It was a huge win as I beat everyone in the world, as I love to say! The ILO Skills Challenge was about providing solutions to skills challenge. My winning proposal involved setting up a Domestic Worker Center in Zimbabwe and developing a domestic work curriculum accredited by the government. This would therefore formalize and professionalize the sector as has always been my vision. We have already started working on the DWC and the curriculum.

Both Chris & Geo and DWAZ are functional achievements that are and continue to make a positive impact in so many people`s lives.

Also being a Mandela Washington Fellow in the 2018 selection where I attended the Civic track training at Drexel, Philadelphia in the USA. It was after my training that I was able to grow DWAZ regionally and expanded into SADC. This has been a great personal achievement as it opened my mind to get me where I am today.

Rallying together domestic workers despite all the hurdles and holding the first-ever Domestic Workers Convention in 2017 is also something I am very proud of.

What is the big picture i.e., where to from here?
Given the massive work we have with domestic work and domestic workers, the bigger picture is to acquire land and build our very own Center where we will be able to fulfil our mission and goals. The Center is designed to be a one-stop Center for training and skills development as well as house all our services including recruitment and placement under one roof. Here we will be able to provide a safe haven for domestic workers who may find themselves in tight situations at any point for any reason.

We already have a space that we are currently using, thanks to ILO through the Skills Mismatch Challenge. However, we want to expand to be able to cater for as many domestic workers as may need help. We want to expand across the region and beyond, replicating this model in other countries so as to really be able to make a difference without geographical restrictions.

We are also working on a curriculum for domestic workers which we want to be approved and accredited by HEXCO and the Ministry of Education to be offered as a course in all vocational training centres in Zimbabwe. We also want to be able to complete and replicate the same in Botswana and South Africa since we have established our brand and services in these countries significantly, and eventually expand beyond.

What word of advice would you like to give to others reading your story?
My advice to someone there working on anything is “Just Do It”. Nike was and is right.