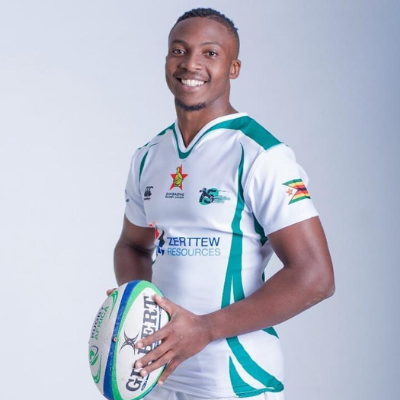 Shingirai Katsvere is a distinguished Zimbabwean rugby player whose career spans over 12 years playing in both local and international tournaments. He has played in four HSBC World Rugby Tournaments and two Africa Cup tournaments alongside some of the nations finest players. In 2018 he won the Africa Cup Champions playing with the Zimbabwe 7 aside team (The Cheetahs); then went on to take home the Victoria Cup Championship trophy in 2019 playing with the Zimbabwe 15 aside team (The Sables). Currently, he plays for Old Georgians Club and looks forward to one day showcase his talent at prestigious rugby tournaments such as the Rugby World Cup. He is a man on a mission.

Sporting excellence was an inherited gift passed on from his grandfather the Zimbabwean football legend Edward ‘Madhobha’ Katsvere, who played for the national team and Dynamos football club in the eighties. He played alongside the likes of Moses Chunga and David Mandigora. Their dream team lifted the domestic premiership trophy seven times during the period from 1980-89. Naturally, as a young boy Shingi wanted to follow his grandfather’s footsteps; however, one day, he stepped onto a rugby pitch, and discovered his own path.

One of the key pillars that have kept this gifted sportsman grounded and driven has been the many destiny supporters that God has placed in his life throughout his career. These include family, friends and fellow sporting peers. Someone close to the heart is his childhood friend, Munashe Kamunda, who inspired him to try out rugby in the first place. Later on, he met Coach Victor Pekani and Milton Rankeni who nurtured his talent at the Mbare academy when he was still a rookie in competitive rugby. In 2016 after sustaining a severe injury while playing for the Zim Under ’20s, Shingirai almost threw in the towel. It was his coach at the time, Mr Farai B Mahari who came to the rescue and helped him find his way back into the game.

Without God, there would be no story to tell nor successes to share. In his own words, Shingi says,

“Growing up, I used to dedicate every game to my family. Then there was a time I played in honour of my former high school Prince Edward Tigers. I even remember at on point dedicating some games to my girlfriend at the time, talk about misplaced energy. But one day, I had a revelation that my gift was God-given, so instead of playing for people, I needed to start honouring Him with it. My family is my motivation, but I do not play for them. God is my source of strength; therefore, every opportunity I get to use this gift, all glory and praise belong to Him. When I play, I hope that people can see Christ in me. Rugby is how I preach to the nations and in the process, inspiring someone out there to pursue their area of calling.”

A devout Christian, Shingirai is the head of sports for Ignite Youth Organisation and also the founder of Sports Discipleship Ministry, an NGO established to support athletes and give them a platform to testify about how God is changing their lives through sports. The organisation also provides support and mentoring to underprivileged children passionate, helping them discover and develop their areas of gifting. Part of the organisation’s vision is to one day establish a children’s home for the disadvantaged and homeless.

Shingirai is a student who is always eager to learn new things. He describes himself as a courageous, purpose-driven, humble and God-loving person. To everyone, he has the following words of encouragement.

“Manage your circle because it will guide you when you are lost. Never listen to negative comments over your life because human beings will always have an opinion about you. Be wise, stick to your path and chase after your dreams. Remember when things falling apart, there is always a light at the end of the tunnel. Positivity is the key to a fulfiling life.”