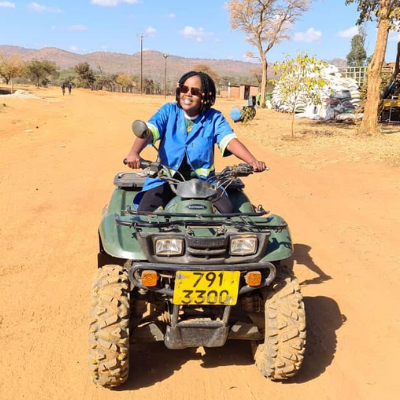 Ruramiso Mashumba is a trailblazing farmer and founder of Mnandi Africa, an organization that helps rural woman combat poverty and malnutrition.

Ruramiso is a young female farmer from Marondera, Zimbabwe and founder of Mnandi Africa, an organization that helps rural woman combat poverty and malnutrition. She holds a BA Degree in Agriculture Business Management from the University of West England (UWE). After completing her degree, Ruramiso worked for one of the United Kingdom’s leading agriculture equipment companies. It was during that time Ruramiso realized how the use of equipment and technology could transform agriculture. She returned to Zimbabwe with a vision to change the image of agriculture in Zimbabwe. In 2012 she relocated to the farm she inherited from her parents and began her journey as a farmer. The farm was bare, with no equipment, but today it is filled with tractors, planting equipment, centre pivot and crop protection equipment.

In 2013 she decided to venture into horticulture crops for export to the European Union and Africa. The following year saw her partnering with Sustainable Afforestation Association to address deforestation in her community by planting one hundred hectares of gum trees. She later expanded into farming a variety of horticulture crops and indigenous organic grains. She milled the grains into flour under the brand Mnandi organic and traditional brown rice and commercial maize. In 2017 Mashumba received a fifty-hectare contract to grow seed for Seed Co, an industry leader whose mandate is to breed, produce, process and market hybrid crop seeds.

Through Mnandi Africa, Ruramiso is empowering and equipping women with skills and knowledge in agriculture, nutrition, markets, and technology. The organization also assists them to access affordable and effective agro-technology through an input-sharing program. Thereby helps them to collectively purchase and sell their goods and services. In 2017, she pitched her organization to Echoing Green in New York and won their fellowship that offers support and seed funding to start-ups. Her application was one of the thirty that won out of a pool of three thousand globally. Mnandi Africa aims to, ultimately, end hunger and poverty in Zimbabwe.

The trailblazing farmer holds several accolades and achievements to her name that is testimony to the outstanding work she is doing in the Zimbabwean agricultural sector: